This workflow describes how a Ghub user may develop, test, troubleshoot, and deploy a new tool on the Ghub site. This workflow assumes the user has developed the tool using the C language; the tool GUI is developed using Rappture.

For more details about how to develop and deploy a tool on the Ghub, refer to Create a Hub Tool with Rappture Builder. 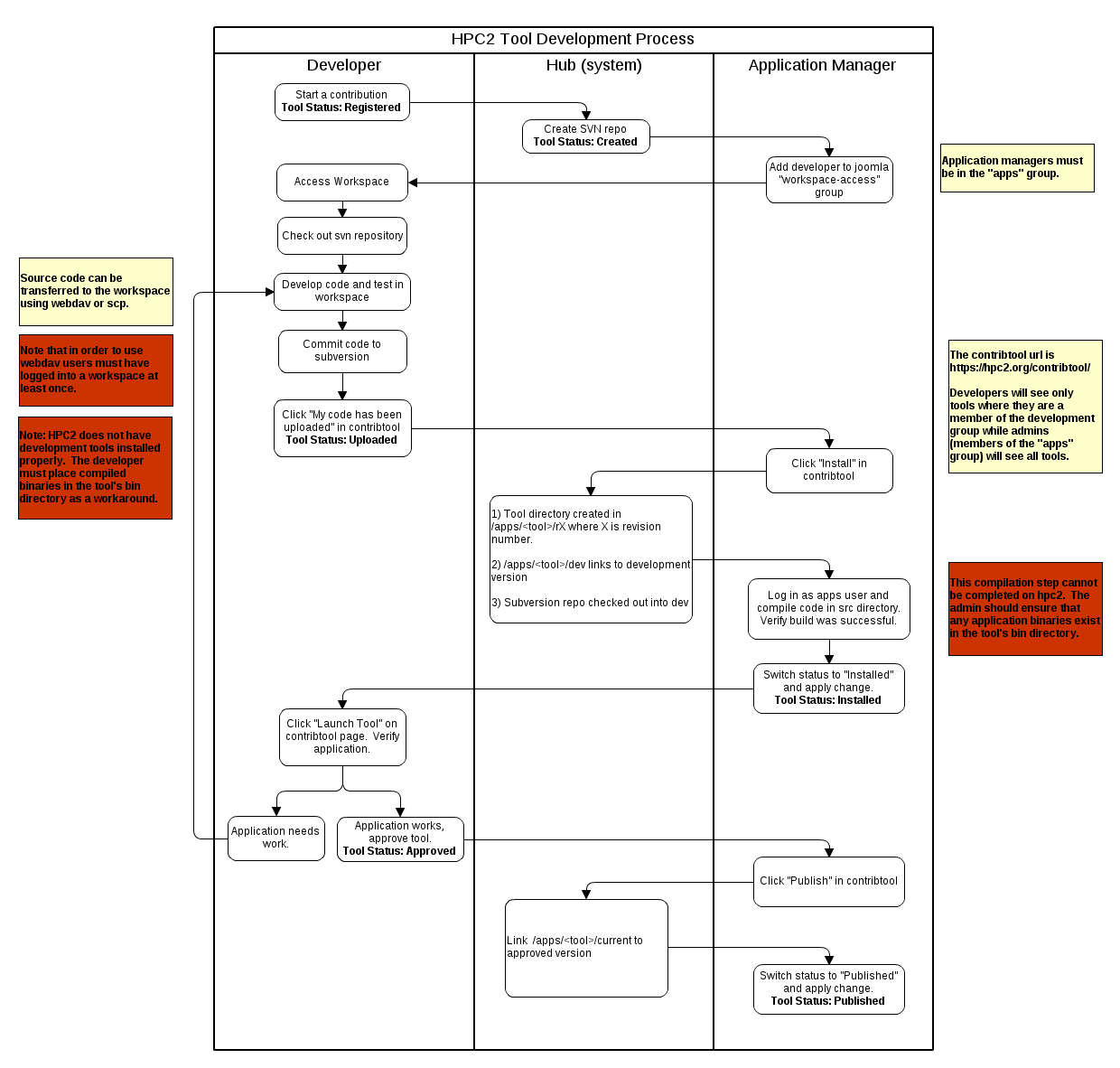 1. An existing Ghub user logs in and accesses the Contribution form.

2. Using the form, the user registers a new tool. In these instructions, the tool is called toolname.

Ghub creates these items for the new tool:

3. The user uploads working code for the new tool onto the Ghub server. The tool is just a program that accepts inputs and generates outputs. The user compiles and tests this basic tool in the Ghub Workspace.

This command creates the correct directory structure for the tool.

5. From the Workspace, the user creates a tool GUI using Rappture. From the ~/apps/toolname/repo subdirectory:

This command auto-generates a GUI that the Ghub will use as a wrapper for the new tool.

The user must edit the following files so that the tool can run on Ghub:

Build and Test Tool and GUI

6. From the Workspace, the user builds and tests the tool:

Check Tool and GUI in to Subversion

7. From the Workspace, the user checks working code into the Ghub’s Subversion repository, from the ~/repo/ directory:

8. The user clicks/checks “My code has been uploaded” in the Contribtool page for the tool. IMPORTANT: If the tool must be compiled, be sure to leave a note to the administrator in the provided text box outlining the specific steps to take!

9. The Ghub Administrator receives email about the new tool’s status change. The administrator must install the tool on Ghub as follows:

This tool status change flips the symbolic link /apps/toolname/dev/ to point to the most recent revision of the tool.

10. The user receives email about the tool’s status change. Now the Installed tool can be run in Ghub’s application space. It is not visible to others outside the development team.

To run the Installed tool, the development user may:

11. Using Contribtool, the user may do one of the following:

This status change modifies the symbolic link /apps/toolname/current/ to point to the most recent revision of the tool.

The tool is now accessible to others on Ghub according to the access privileges the user set in Contribtool.

13. At any time, the user can access the Workspace to make changes to the tool and check them into the Subversion repository. The user should then visit the Contribtool page to mark the tool as Updated (be sure to make a note about any compilation or other steps needed for the installation). The Ghub Administrator then executes step 9.

To run and test the tool from the Workspace command line, the user may access:

The user may consult the ~/data/ subdirectories, sessions/ and results/, to assist in troubleshooting.

Comments on this entry

There are no comments on this entry.